At the same time that the Craftsman style was in vogue, the Neo-Tudor style also became popular. Indeed both styles were striving to achieve a sense of coziness and quaintness, and one sometimes finds (in Cedar Crest, for example) Craftsman and Neo-Tudor components mixed together. Neo-Tudor exteriors are usually a mixture of brick and stucco, often with some half-timbering included. Other characteristics include high-pitched roofs, asymmetrical configurations, enclosed entryways, fireplaces with ornamented chimneys and chimney pots, and casement windows. 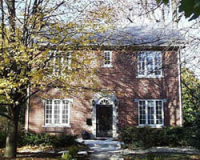 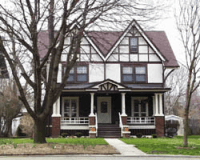