The Medieval Revival style of architectural is also commonly referred to as Tudor. The name “Tudor” suggests that these houses imitate English architecture from the early 16th century. However, most Tudor style homes were inspired by building techniques from an earlier time. Some Tudor houses mimic humble Medieval cottages. They may even include a false thatched roof. Other Tudor homes borrow ideas from late Medieval palaces. They may have overlapping gables, parapets and beautifully patterned brick or stonework. These historic details combine with Victorian or Craftsman flourishes.


As in many Queen Anne and Stick-style homes, Tudor style houses often feature striking decorative timbers. These timbers hint at, but do not duplicate Medieval building techniques. In Medieval houses, the timber framing was integral with the structure. Modern Tudor houses, however, merely suggest the structural framework with false half-timbering. This decorative woodwork comes in many different designs, with stucco or patterned brick between the timbers. 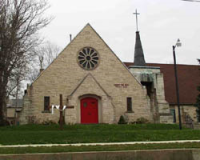