What is an Aquifer?

Contrary to popular belief, an aquifer is not a free flowing underground river or lake. Actually, an aquifer is a body of rock or sediment that is completely saturated – water is in it and all around it. It can be made of sand, gravel, sandstone, or other rocks that store and transmit water. What goes in an aquifer stays in an aquifer.

The water within an aquifer most often begins as rain or snow melt that seeps into the ground. The amount of water that makes its way to the aquifer varies widely from place to place depending on the type of surface and underlying soils. Once underground water will continue to be pulled downward until it reaches an impermeable layer of rock. The movement of water through small pores and the spaces between rocks acts as a natural filtering process, purifying the water and removing sediment. Sooner or later water will eventually leave the aquifer and need to be replenished through a process called "recharge".

Water that flows into an aquifer may be contaminated by many things we do at or near the surface of the earth. Contaminants, not removed by the natural filtering process, may reach the aquifer through natural or man-made pathway. Deliberate disposal of waste such as landfills, septic tanks, and injection wells can have an impact on the quality of an aquifer. 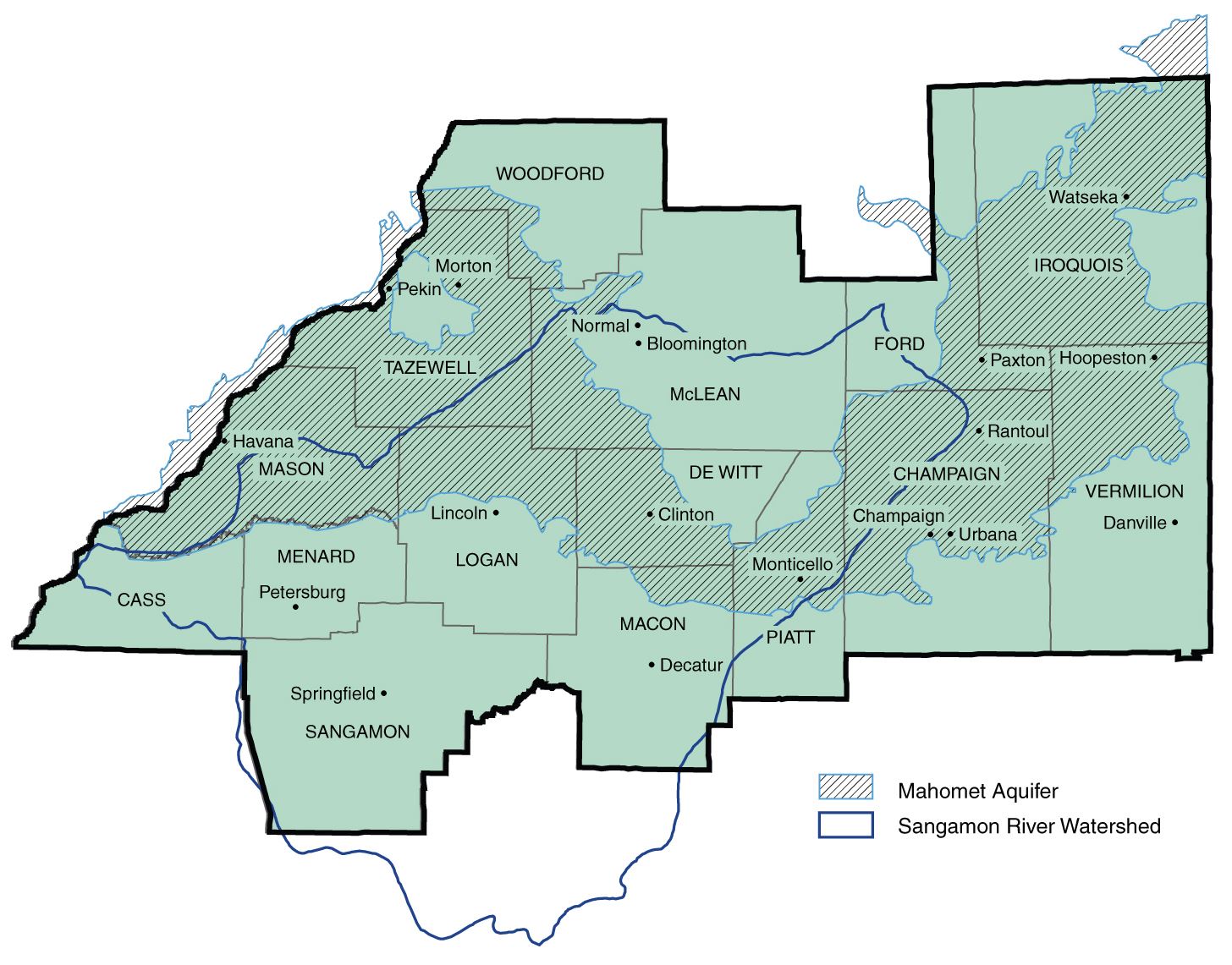 Samples of water taken from the Mahomet Aquifer have been dated between 1,000 and 12,000 years old, however the geological events that lead to the creation of the aquifer were set in motion over a million years ago. The Mahomet Aquifer is composed of sand and gravel that was deposited in the valley of an ancient river that was formed 1.5 million years ago. This ancient river was later disrupted by floods that permanently altered the landscape. The remnants of this valley were covered by sand, silt, gravel, and clay left by a series of advancing and retreating glaciers.

Thick sand deposits deep underground are responsible for producing the aquifers pristine waters are typically found 300 feet below the surface.  These deposits average close to 100 feet thick and may be as much as 200 feet in some places. However, because the land surface elevation drops  near the Illinois River the aquifer reaches the surface at its western boundary. While many of the recharge areas - as described above - have been inferred using groundwater flow models, actual mapping and knowledge of these recharge areas is not complete.
Utility Payments
Easily Pay Your Bills Online
Cultural Arts
Arts for All!
Parks & Recreation
Resource & Rental Information
Economic Development
Stay Informed & See Opportunities
Contact the Mayor and Council
Questions & Feedback
Open Data Portal
Connecting You to Community Data
/QuickLinks.aspx
Government Websites by CivicPlus®
[]